The water cycle on earth changes every day and the repeating changes make a cycle. During the cycle process, water is going through the changes and sometimes it can be solid like ice, liquid like water, or a gas-like vapor.

On the other hand, ice becomes water as liquid or gas as vapor. Again the water vapor can be liquid water or ice too. The vapor comes to earth lands as a liquid by rain formation,

This water cycle is known as a hydrological. In the hydrological cycle water from oceans, rivers, lakes, plants, swamps, and even from a human can turn into vapor.

How Does Rain Form And What Is The Water Cycle

The Water Cycle Definition – What Does it Mean?

The water cycle is basically the complete journey that water makes in its life. Which is called a scientifically hydraulic cycle. In this process water move from one place to another, and from one state to other as well as in different conditions.

As the word ‘cycle’ says that is why there is no starting point. This means water transformation begins at any point and follows its path until it gets to where we started again.

So, the water cycle called in scientific that the water changes from water vapor in the atmosphere to liquid water through the process of condensation and precipitation. The condensed water back to water vapor through evaporation, transpiration, and respiration.

The Steps in Water Cycle

Evaporation is the first step of the water cycle. In this process where water at the surface like a river, lake, and ocean turns into water vapors. Naturally, water absorbs the heat energy from the sun, and that set the water into mists. The primary source of water evaporation are oceans, the seas, rivers, lakes, and surface runoff water. In the evaporation process water shifts from the hydrosphere to the atmosphere and as it evaporated it reduces the temperature.

When water vaporized into water vapor and then raised in the atmosphere. The water vapors changed into a small piece of little ice/water as the temperature is low at high altitudes. This process is called scientifically is condensation. These particles are formed clouds and fog when they come together in the sky.

Besides the evaporation, sublimation also contributes to the water vapor. In the sublimation process where ice directly transforms into water vapor without converting into liquid water.

At the high altitude where the temperature is shallow, this phenomenon also occurs high pressure is needed. The ice sheet of the north and south pole is the primary source of water sublimation.

However, the ice cap in the mountain has also supported this process. Sublimation is a slightly slower process than evaporation.

Condense water vapor, or the could then pour down to land as precipitation due to wind or fall of temperature. This situation occurs due to the water droplets combined and making bigger droplets.

Besides when the water in a high altitude the air cannot hold any more water due to, losing its heat energy. In very low temperatures this scenario knows as precipitation.

As waterfall down to earth and its makes precipitation. Some of the water is absorbed by the soil. This is the process known transpiration of water.

Transpiration is the water process like water evaporation where liquid water is turned into water vapor by plants.

The root of the plants absorbed the water from the soil and transport to the leaves. Where the photosynthesis process is performed by taking heating energy from the sun.

During this process, extra water moved out from the leaves through the stomata as water vapor.

When the water pours down, it can be in any form. It leads to a runoff on the surface. So, runoff or surface runoff is the process where water runs over the surface of the earth.

When the snow melts into the water, it also led to flow. While water is running over the ground surface, it displaces the topsoil with it and transports the minerals along with the stream.

Besides, the runoff combines to form channels and then rivers and ends up into lakes, rivers, oceans, and seas.

Some of the water that precipitates does not run off into the rivers and is absorbed by the plants or gets evaporated. It moves deep into the soil. This is called infiltration.

The water seeps down and increases the level of the groundwater table. It is called pure water and is drinkable. The penetration is measured as inches of water-soaked by the soil per hour.

The water cycle is imperative, and examples of water cycling and precipitation effect affect Earth’s environments.

Be that as it may, precipitation and surface spillover additionally assume critical jobs in the cycling of different components.

We’ll investigate how this function in the accompanying articles, where we’ll inspect distinctive components’ biogeochemical cycles.

Why The Water Cycle is Important?

More than 70 percent of Earth’s surface is covered by water. Life is impossible without water. Besides the water cycle is very important because its process provides Earth with the natural, continual water supply all living things need to survive. This process is the natural process in which water on earth changes through different states and moves from one level to another. Energy from the sun’s penetrating rays heats the surface water of lakes, ponds, lakes, and oceans.

Water turns from its liquid form to a gas form called water vapor. Water vapor rises and cools in the air. As it cools, it condenses and turns back into a liquid inside of clouds.

When the conditions are right, these water droplets fall from the clouds to Earth’s surface in the form of precipitation. Precipitation runs off or is absorbed by the ground adding to Earth’s natural water tables. A significant number of the procedures and elements of a human body require water. It is necessary for moving supplements among cells and transporting supplements in blood. Creatures likewise depend on the plants and animals in water to survive.

For instance, a frog lays its eggs in water since they bring forth as tadpoles and stay in the water until the point that they develop into a grown-up. Water is a valuable, nonliving asset forever.

How Does Agriculture Affect The Water Cycle?

If you are using surface water bodies to irrigate your goods, you can dry up the water in rivers, lakes, and impoundments.

While using groundwater resources, the depleting groundwater level even finishes all extractable water of your aquifer. These are the problems associated with agriculture.

Water evaporation transforms into a gas and ascends into the air. This gathers water beads at the highest point of the container, known as buildup when gas transforms once again into the water.

At the point when the water gets sufficiently substantial, it falls back to the base of the jug exactly as rain falls back to earth.

Water dissipating and afterward transforming once again into a strong or fluid and coming back to earth is the water cycle.

The amount of water on the planet is basically stable, but it is in continuous cyclic movement and hence, is referred to as the water cycle.

For what reason is the sun a main consideration in the water cycle?

The sun is the primary wellspring of vitality, and without vitality, the cycle would not happen.

What job does the water cycle play in the survival of plants and creatures?

Plants and creatures require water with the end goal of survival. Their life cycles and generation rely upon accessible water from the water cycle.

What station did you go to most in the Water Cycle Tour Activity?

No doubt you went to the sea station and the environment station the most. The Water Cycle Tour has an emphasis on those stations since that is the place most of the water is on Earth.

Which procedure of the water cycle do we list first?

Any procedure of the water cycle might be recorded first since cycles ceaselessly rehash. You can begin in a cycle shape anyplace.

Rundown of the procedures that happen in the water cycle? 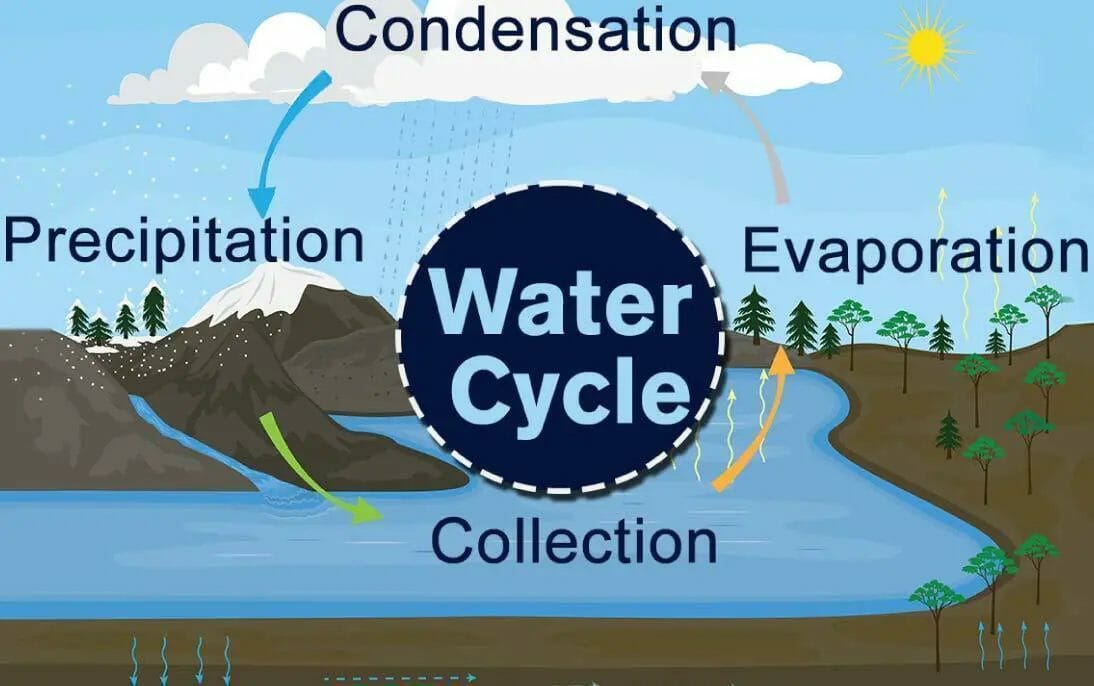 In the water cycle evaporation is the process where water converts or transforms from liquid to vapor form. In this evaporation water transform into vapor and water bodies moves into the atmosphere, according to Michigan Technology University. When water is heated, it evaporates after the molecules vibrate and move so quickly. When an optimum temperature is gained, they escape into the atmosphere as water vapor molecules. Evaporation is one of two forms of vaporization and the other of water boiling.

To conduct the evaporation process energy is required as it proceeds faster at a higher temperature and higher flow rates between the liquid and gaseous phase. The surface tension in water is the elastic tendency of a fluid that allows insects to float on water and have the pressure that allows for bubbles formation.

It’s a straightforward question What was the earth’s water come from? The answer is the water cycle. The water cycle has no starting point. But we can set it to the ocean as they have a large amount of water. The water cycle is driven by the sun. The sun heated the pool then evaporate, and water bodies moved into the atmosphere. Further ice and snow can sublimate directly into water vapor. Besides evaporation can also transit from plants and soil. The vapor rises into the air where cooler temperatures cause it to condense into clouds. Air currents move clouds around the globe, and cloud particles collide, grow, and fall out of the sky as precipitation.

How To Boil Water Without Electricity: 8 Ways To Heat Water When The Power Is Out

How To Clean A Water Dispenser With Vinegar: The Ultimate Guide

How To Decontaminate Water: 10 Effective Methods To Make Water Safe To Drink

How To Beat Level 50 On The Water Sort Puzzle

How Often To Water Roses In Summer: The Complete Guide

How Often To Water Ficus? Everything You Need To Know