How Much Chlorine is in Drinking Water? (The Dangers of Chlorine in Tap Water)

Chlorine is commonly added to drinking water because it kills bacteria such as E. coli. But does adding chlorine really improve public health? And what happens when too much chlorine gets into our bodies?

Many studies show that chlorine levels above 0.2 parts per million (ppm) increase the risk of bladder cancer. In addition, excessive amounts of chlorine can cause skin irritation or rashes, nausea, headaches and dizziness.

Our tap water has grown increasingly contaminated over time. In addition to providing us with safe drinking water, our water supply also keeps us hydrated. However, chlorine is added to our drinking water to prevent bacteria from growing.

Table of Contents
1
What is Chlorination?
2
Why Do We Chlorinate Our Water?
3
How does chlorine disinfect water?
4
What are the benefits of drinking chlorinated water?
5
Safer levels of chlorine in tap water
6
What happens if too much chlorine is added to drinking water?
7
How Much Chlorine is in Tap Water?
8
Does chlorine in tap water pose any health risks?
9
How can I remove chlorine from my drinking water at home?
10
What are some alternatives to using chlorine to treat water?
11
Are there any side effects of drinking too much-chlorinated water?
12
How Much Chlorine is in Drinking Water FAQ:
1. Is bottled water chlorinated?
2. Does boiling water remove chlorine?
3. What is stronger, bleach or chlorine?
4. Can you use bleach instead of chlorine?
5. Is liquid chlorine better than tablets?
6. Is there chlorine in soap?
7. Is Clorox the same thing as chlorine?
8. Can you use pool chlorine for household cleaning?
9. Does chlorine whiten skin?
10. Does chlorine darken skin?
13
Conclusion

Chlorine is a common disinfectant that kills drinking water parasites, bacteria, and viruses. It can be achieved in different ways, but all of them have a safe level of chlorine.

Why Do We Chlorinate Our Water? 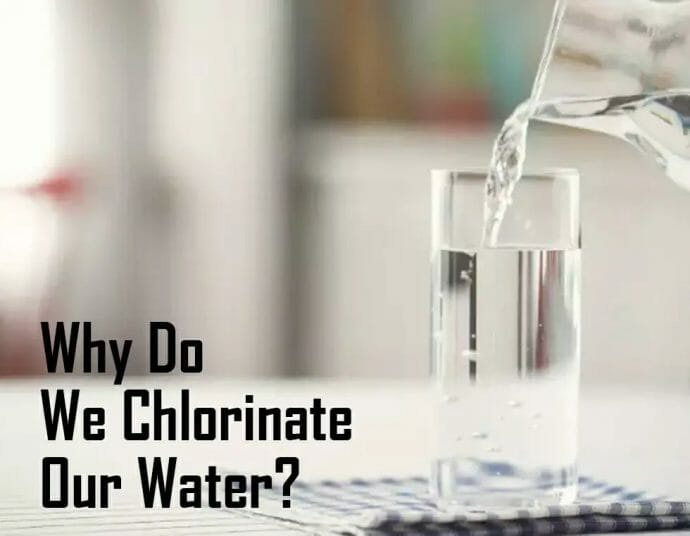 Much research and studies have used chlorine as a disinfectant. Chlorination has proven effective against bacteria and viruses; however, it cannot inactivate all microbes.

In some cases, protozoan cysts are not a significant concern, chlorination is a suitable disinfection method because it is inexpensive yet effective in disinfecting many other possibly present contaminants. The chlorination process is also relatively easy to implement compared to other water treatment methods.

It is an effective method in water emergencies as it can quickly eliminate an overload of pathogens. An emergency water situation can be anything from a filter breakdown to mixing treated and raw water. You also may want to know how to remove chlorine from water click here.

How does chlorine disinfect water?

Chlorine is used to kill bacteria and other microorganisms in water. It kills these organisms effectively and is the most common disinfectant used in homes, industries, and healthcare facilities.

This process kills the bacteria and other microorganisms in the water. Chlorine also forms disinfection byproducts (DBPs) when it reacts with organic material in water. Some of these DBPs can be harmful to humans.

What are the benefits of drinking chlorinated water?

Chlorine is the most common disinfectant used in water treatment plants to kill bacteria, viruses, and other microorganisms that can cause disease. The benefits of chlorinating drinking water are many:

-Chlorination helps keep tap water safe as it travels from the treatment plant to your home.

-Chlorine helps kill bacteria like E. coli and other pathogens in our bodies.

-Chlorine prevents the growth of algae and reduces odors.

-Chlorine kills microorganisms that cause diarrhea and stomach cramps.

Chlorine levels up to 4 milligrams per liter (mg/L or four parts per million (ppm)) are considered safe in drinking water. At this level, harmful health effects are unlikely to occur.

The first option for testing chlorine level, you can use a liquid chemical OTO (orthotolidine) that causes a color change to yellow in the presence of total chlorine. Then, you simply fill a tube with water, add 1-5 drops of the solution, and look for the color change.

What happens if too much chlorine is added to drinking water?

How Much Chlorine is in Tap Water?

Chlorine is used to purify water from municipal sources for human consumption. The amount of chlorine varies based on the water, the size of the system serving the area, and how often the water has been previously treated. Most cities add between 0.5 and 2 ppm chlorine to the water supply.

Does chlorine in tap water pose any health risks?

Chlorine is a chemical commonly used to disinfect water and help avoid bacteria and other disease-causing microorganisms. However, there have been recent concerns about the safety of chlorine and its use in drinking water. In particular,

the most harmful DBPs (disinfection byproducts) created by chlorine are trihalomethanes (THMs). Consuming tap water with THMs can lead to serious health complications.

Drinking tap water containing too much chlorine can cause stomach cramps, vomiting, diarrhea, or skin rashes.

People ingest large amounts of chlorine over a long period can damage the liver.

Children who drink water with excessive levels of chlorine are more likely to develop asthma.

When chlorine levels exceed 0.5 mg/L, skin irritation or other adverse effects are at risk.

How can I remove chlorine from my drinking water at home?

If you don't want to have chlorine in your drinking water at home, there are a few different options available. One option is to install a whole-home water filter system to remove chlorine and other contaminants from your tap water.

Another option is to establish a point-of-use water filter system to remove chlorine and other impurities from the water you use for drinking and cooking.

Finally, another option for removing chlorine from your drinking water is to get your tap water tested by a professional.

What are some alternatives to using chlorine to treat water?

Chlorine is a better disinfectant than ozone because it leaves a residue in the distribution system, decays quickly, and does not generate bromoform. Ozone can cause low levels of bromoform by oxidation of bromide to hypobromous acid.

There is conflicting evidence concerning the bacterial mutagenicity of ozonation byproducts. Chlorine dioxide is used to disinfect water sources in which chlorophenols tastes occur after chlorine treatment.

Are there any side effects of drinking too much-chlorinated water?

Chlorine is used to kill bacteria in swimming pools, which is why chlorine is added to tap water. The problem is that chlorine also kills off some beneficial bacteria in our bodies, such as E. coli.

Drinking too much chlorine can cause diarrhea, stomach cramps, nausea, headaches, rashes, and other symptoms.

Drinking too much-chlorinated water may cause health issues such as skin rashes, stomach aches, headaches, sore throat, nausea, diarrhea, and vomiting. However, drinking bottled water instead of tap water is the best way to avoid these symptoms.

How Much Chlorine is in Drinking Water FAQ:

No, it doesn't. However, it can be removed from tap water using a filter system.

3. What is stronger, bleach or chlorine?

Bleach is stronger than chlorine.

4. Can you use bleach instead of chlorine?

Yes, it can be used for cleaning purposes. However, if you want to ensure that your water is safe, you should always use chlorine.

5. Is liquid chlorine better than tablets?

Liquid chlorine is more effective at killing bacteria because it can be used for a long time without losing effectiveness.

6. Is there chlorine in soap?

Yes! There are two types of chlorine in soap: hypochlorous acid and chlorinated water. Both can be used safely for washing clothes.

7. Is Clorox the same thing as chlorine?

No! The two are different. Chlorine is an element found in water, while Clorox is a household cleaner made from the bleach.

8. Can you use pool chlorine for household cleaning?

Yes, you can use pool chlorine to clean your house. You need to dilute it with water.

Chlorine can help remove dirt from your skin, but it doesn't make it whiter. To get white skin, use an exfoliating cleanser instead of water.

Yes, it can cause dark spots on your face. However, if you use a mild cleanser with little to no soap, then this will help lighten up your skin.

Chlorine is a chemical element used to sanitize water. The part has a variety of uses, including its use in household bleach, swimming pools, and several industrial processes. While chlorine is a valuable chemical that can be used to improve drinking water quality, the element can also negatively impact health. We hope you've enjoyed our article and found it helpful.

Is Filtered Water Good For Plants? [The Answer Might Surprise You]

How to remove hard water buildup from hair

How to Protect Skin from Hard Water: 11 Solutions for Softer Skin and Hair