How does chlorine kill bacteria? – [The mechanism, available chlorine, and contact time]

Chlorine is a highly reactive element that can quickly kill bacteria. When added to water, chlorine creates a chlorine-water solution that can kill bacteria on contact. 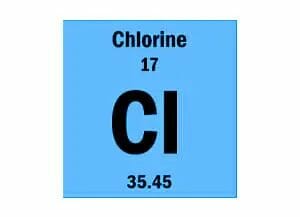 How does chlorine kill bacteria? 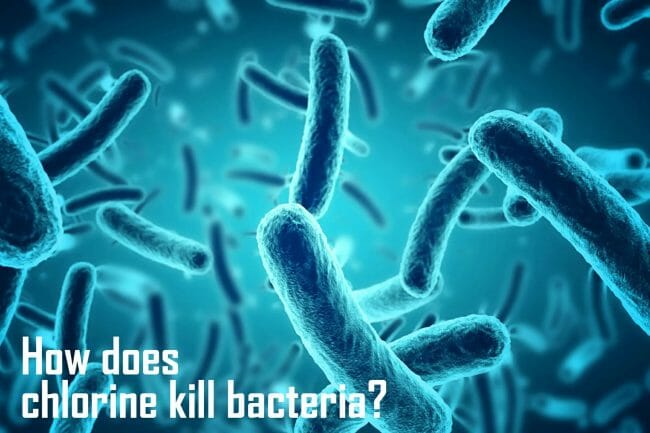 Chlorine bleach is a form of chlorine specially designed to damage the DNA of bacteria. This damage causes the bacteria to die, and it can be effective at killing even the most resistant strains of bacteria. In addition, chlorine damages bacteria's cell membrane, allowing it to enter the cell and disrupt mitochondrial respiration and DNA synthesis.

If chlorine concentration and pH are kept as the Centers for Disease Control, and Prevention recommended, chlorine damage usually occurs within a minute. However, some germs can tolerate chlorine moderately (Giardia, Hepatitis A ) very well ( Cryptosporidium ).

What are the benefits of using chlorine to kill bacteria?

Chlorine is a common disinfectant that can kill bacteria. It has several benefits, including that it is cost-effective and environmentally friendly. It is also effective against various pathogens, including some resistant to other forms of disinfection.

The benefits of using chlorine to kill bacteria in the water are many. Chlorine destroys pathogenic bacteria such as E-coli, salmonella, campylobacter, and cryptosporidium. Pathogenic bacteria cause food poisoning and other illnesses. When added to water, chlorine reacts with the water's organic material, creating hypochlorous acid (HCl).

HCl damages the cell walls of these pathogens, and they die as a result. This process also produces free radicals, which can damage other cells in the body and cause health problems. Tap water and whole house filters can benefit from chlorine's ability to kill bacteria.

Are there any drawbacks to using chlorine to kill bacteria?

While chlorine is an effective way to kill bacteria, its use has some drawbacks. For example, it can be toxic if ingested, and it can also be harmful to the environment. In addition, using chlorine can cause unpleasant odors and flavors in water.

You can remove chlorine from water using a de-chlorinator if you do not want to use chlorine for sanitizing. This will leave your water safe to drink and free of unwanted smells or flavors. However, the followings are some drawbacks of chlorine:

How does chlorine work against different types of bacteria?

Is chlorination effective in killing all bacteria present in water?

It is important to note that chlorination is not 100% effective at killing bacteria in water. In fact, no disinfection method is foolproof--some bacteria always survive. However, to maintain a low bacteria level in our water, we need to use chlorination (or any other disinfectant) along with proper maintenance and monitoring.

Chlorination is the most common method of disinfecting water and is used by municipalities worldwide to ensure that drinking water is safe.

Chlorination byproducts and their potential health effects are well documented. It can be hard to know what to believe, but we want to provide you with the most accurate information possible.

Chlorination byproducts are created when chlorine is added to water as a disinfectant. These byproducts include trihalomethanes (THMs) and haloacetic acids (HAAs).

There are tradeoffs with using any disinfectant, including chlorine. For example, chloramines can form other DBPs than chlorine and increase nitrate levels and corrosion in distribution systems.

However, ozone is effective but does not provide protection, so chloramines or chlorine must still be added. UV light is also effective in clear water and does not form DBPs.

In general, chlorination byproducts may pose some health risks, but they are still the most commonly used disinfectant in public water systems because of their many advantages.

What is the optimum concentration of chlorine for disinfection purposes?

The optimal chlorine concentration for disinfection is 0.5 ppm (parts per million). Therefore, chlorine must still be added to tap water even if UV light is being used to disinfect it. Ultraviolet (UV) light is effective in clear water and does not form DBPs. However, it cannot be used in cloudy water or water with high organic content.

How long should water be treated with chlorine before it is safe to drink?

Public water systems using surface water or exposing the water to outside air should disinfect their water. Chlorine is the most common disinfectant used in these systems. Water should be treated with chlorine 30 minutes before drinking.

To ensure health, the EPA limits chlorine levels in drinking water. Chlorine can combine with organic matter in the water to form disinfection byproducts (DBPs).

Water systems must test their treated water to measure levels of regulated DBPs. DBPs must be reduced if the water system's treated water exceeds health-based guidance values set by EPA. This includes notifying all of their customers.

What other methods for disinfecting water, and how do they compare to chlorination?

There are a few other methods for disinfecting water, and each has its benefits and drawbacks. Chloramines, for example, are a mixture of chlorine and ammonia. They are effective at killing bacteria and can be used in systems with higher organic matter levels. However, they can also form other dangerous disinfection byproducts (DBPs).

Chlorine also has a short-term effect on bacterial populations, meaning that they will eventually die off if not killed by another method. Other sanitizing and disinfecting methods, such as Ultraviolet radiation, have longer-term effects that can kill more bacteria.

Ozone is another common disinfectant. In addition to killing bacteria, it leaves no residual disinfectant in the water. To protect water from the treatment plant to the tap, chlorine or chloramines must still be added to the distribution system.

Ultraviolet light is another option for disinfecting water. It is effective in clear water and does not form DBPs. However, in the distribution system, UV light does not provide protection, so chloramines or chlorine must still be added to protect water from the treatment plant to the tap.

Due to its safety and effectiveness, chlorination is still the most common method for disinfecting water. However, it has some disadvantages compared to other methods like chloramines or ozone.

Are there any special considerations when using chlorine to disinfect swimming pool water?

When using chlorine to disinfect swimming pool water, there are some special considerations you should take into account. When working with chlorine bleach, it is necessary to wear gloves, eyewear, and a mask.

It is relatively safe to swim in a pool without a lifeguard if you are not exposed to people infected with the Coronavirus because chlorine and bromine kill most germs in the water, including the Coronavirus.

However, swimming in an unsupervised pool can also pose other risks, such as getting hit by a careless swimmer or getting trapped underwater.

Keep your pool's chlorine and pH levels at least twice a day to ensure they remain effective at disinfecting the water. Additionally, disinfect surfaces like handrails and tables to prevent germs from spreading.

What are the properties of chlorine that make it effective at killing bacteria?

A bacterial cell's membrane can be disrupted by chlorine, a powerful oxidizing agent.

- Depending on the type of bacteria, chlorine concentrations are generally between 0.5 and 2 ppm (parts per million).

- Chlorine kills bacteria in the water but is also used in swimming pools, food preparation, and hospital sanitation.

What are some tips for using chlorine to kill bacteria?

- Chlorine can be used in various forms, including tablets, powder, and liquid

- Chlorine can be added directly to pools, spas, and hot tubs

- Chlorine should be added to water that will be used for drinking, cooking, or bathing

- Chlorine can be used to disinfect dishware, utensils, and surfaces

Coronavirus is effectively treated with chlorine bleach. Cleaning should be done according to the instructions on the product label. Chlorine-containing disinfectants should only be used on hard surfaces, not on fabrics, other soft materials, or human skin.

Bleach and other chlorine-containing cleaners should never be mixed with ammonia or vinegar. These combinations release toxic gases into the air, making breathing hard.

How does chlorine kill bacteria FAQs:

1. Is Chlorine good for acne

Chlorine can be helpful for acne but only temporarily.

2. How Long Does It Take for Chlorine to Kill Bacteria?

It takes about 10-60 minutes for chlorine to kill most bacteria. However, it can take longer if the bacteria is resistant to chlorine.

In some cases, chlorine in swimming pools can irritate the skin and worsen psoriasis.

4. What do swimmers put on their skin?

Swimmers put prebiotic moisturizer on their skin before swimming.

5. Does coconut oil protect from chlorine?

Yes, natural oils such as coconut and olive oil are protected from chlorine.

6. At which stage of water treatment is chlorine added?

Chlorine is added to the final stage of water.

7. What happens if chlorine levels are too high in drinking water?

The main health effect of drinking too much-chlorinated water is bladder cancer.

Chlorine is also used to bleach clothes and other materials. Besides being an effective disinfectant, chlorine is also used in swimming pools and water treatment plants. It kills bacteria by breaking down their cell walls. Remember to read the safety guide with your product before using it.

How long does it take for boiling water to cool?